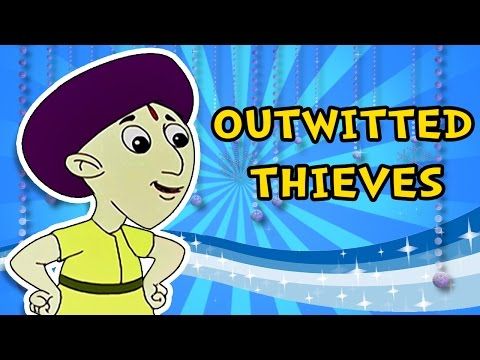 One night Tenali was resting in his home when he heard some sounds outside.Tenali Raman at once understood that there were some theives outside to rob them.Tenali then thought of a plan.He spoke to his son loudly. "Do you know son,that there are theives in the kingdom?They are stealing everywhere in the neighbourhood and might come here as well.It would be best that we keep all our treasures in a metal pot and drop it into the well." After some time the theives saw that tenali and his son had dropped a large metal pot in the well.The theives waited for some time and made sure that both father and son entered the house.The thieves then went to the well and spent the entire night drawing water from the well so that they could take out the pot easily.Soon it was nearly morning.Finally the thieves could pull out the pot from the well and broke it open.They were shocked to find stones in the pot!Just then Tenali Raman came out of the house and pretended to be surprised.Tenali asked the thieves "Are you looking for something, friends?If you tell me I can help you." The thieves were extremely scared and they requested Tenali not to take them to the king.Tenali assured them that he wouldn't do so on a promise that they would stop robbery.Once more Tenali showed his wit and saved the kingdom from impending theft.