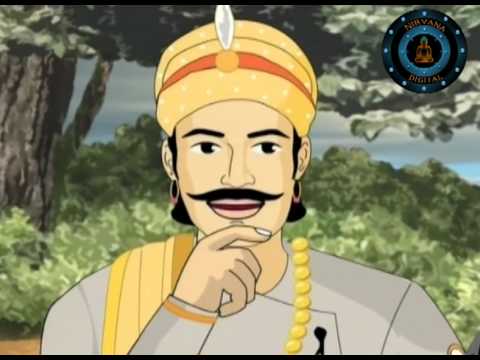 Once Akbar asked Birbal to bring him four of the world's worst possible four fools. So the following morning, Birbal began looking for the four fools. The first fool he saw was a Brahmin. This Brahmin was running very fast carrying a plate of betel-nut, rice and a few other things. When the Minister asked the Brahmin why he was running, the Brahmin answered, "My wife has just given birth to a son, and I am bringing her the ceremonial foods. Unfortunately, the boy is not my child, but his father will also be there. So, I am going to bless the new father and mother, and the baby. That is why I am running. "Ah!" thought the Minister, "I have got my first fool," and he told the Brahmin to come to the court with him. "No, no! I cannot come to the court," protested the Brahmin. "I have to got to my wife." Birbal declared, "I am the Emperor's Minister. It is the Emperor's command that you come." So the foolish Brahmin had to go to Akbar's palace. One the way, they saw a man sitting on a horse. The man was carrying a very heavy load on his shoulders. Birbal asked him. "Why are you carrying that load on your shoulders?" The man replied, "My horse is a mare, and she is pregnant. I do not want to hurt this poor animal by making her carry such a heavy burden, so I have put the load on my own shoulders." Birbal said, "If you are sitting on the horse, the weight will be the same whether it is on your shoulders or on the back of the horse." But the man insisted that he was taking half the burden on his own shoulders. "Here is another fool," Birbal said to himself, and commanded the man to come along to the Emperor. "Your Majesty," proclaimed the Minister when they came before Akbar, "here are your fools." "I asked you to bring me four fools, did I not?" said Akbar. "Where are the another two?" Out of four fools, "I have two here," replied Birbal, and he narrated their foolish actions to the Emperor. Then he said, "The third fool is you, Your Majesty. Who but a fool is interested in seeing fools" A wise Emperor would like to know whether there are wise men in his Empire. And I am the fourth fool. I listen to your foolish commands and waste my time carrying them out. Only a fool would obey the commands of fool, so that makes me the fourth fool."