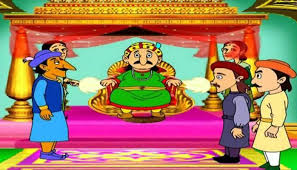 One day, one rich man wanted to punish a man named Hasan. He blamed him that he had stolen necklace from his house, and reported to the Akbar . The case was brought in the court. Akbar asked the man, "Why do you think that Hasan has stolen your necklace?" The man replied, "Your Honor, I have seen him stealing the necklace." Hasan said, "No Huzoor I am innocent, "I do not know anything about necklace." The rich man said, "Huzoor If he is innocent, let him prove his innocence. let me bring the hot iron, and if he can hold it in his bare hands, then I will agree that he has not stolen my necklace, and he is speaking truth." Hasan said, "If I am speaking the truth, then I will not burn my hands with that hot iron?" "you are right. God will protect you. said the rich man. Now Hasan could not do anything but to hold red hot iron in his hands to prove his innocence, and that he was speaking the truth. He asked Akbar to give him one day to look for that necklace again and He went home. He took advice from Birbal . When he returned next day, he said, "I am ready for that. But the same thing should apply to him too. If he is speaking the truth, then the red hot iron should not burn his hands also. So let him bring that red hot iron holding in his both hands, then I will hold that iron in my bare hands." Now the rich man was speechless. He told the Akbar that he would go and search his necklace again in his house, maybe it was misplaced somewhere there. Akbar ordered to give necklace to Hasan as a punishment to the Rich man.