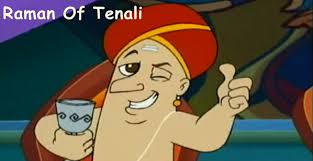 There weere several crafty ministers in the court of king Krishnadevraya.These ministers were always wanting to rob the king of his wealth.They would bring worthless gifts for the king,impress him and would be rewarded in gold coins.There was one such minister named Ishwar Pandit in the court of the king.One day he came and stood amongst the crowd holding a green crow in his hand.He said,"Your Majesty,don't take this bird for a parrot.This is a crow.Infact this is a green crow which is a real rare species.I have traced this from the depth of your jungles." The king was amazed with the discovery of the green crow and he at once declared a reward for the minister with one thousand gold coins.Tenali Raman was present in the court and he saw Ishwar Pandit's deception.Tenali asked the king to withhold the reward and said that he would fetch more green crows from the jungles to showcase the rare species.The king agreed with Tenali's suggestion and asked him to return within seven days.Tenali traced the painter who helped Ishwar Pandit paint the crow green.Tenali asked the painter to paint six more crows green and promised the painter that he would be rewarded for his skill soon.After a week Tenali entered the court with a large cage with six green crows.The king was amazed and asked Tenali what reward he expected from the king.Tenali said,"I would get my reward if you stop wasting your money on such gimmicks.Has anyone thought how a crow could be green?" Tenali called the painter and everything was clear.The pandit was afraid but the king spared him on Tenali's request.The painter was rewrded for his skill.Tenali was not only wise but he was a extremely good and honest human being.